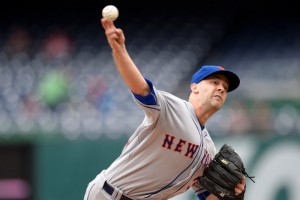 The New York Mets are thinking about trading away one of their better starters and the unlucky man might be Dillon Gee. I think this is one of the worst moves they can possibly make. Knowing that pitchers are having major problems with Tommy John Surgery, their “ace” is recovering from his own TJ surgery and they want to preserve his arm by giving him rest so he can make it through the whole season. Then why would the Mets want to trade any of their pitchers? Everyone in baseball talks about wanting pitching depth so why would the Mets do the opposite?

There is a solution for the Mets though! They can solve all their problems by keeping all six of their pitchers: Jacob DeGrom, Matt Wheeler, Bartolo Colon, Matt Harvey, Jon Niese AND Dillon Gee. If they do need to get rid of a pitcher I would say Bartolo Colon, no offense to my fellow latinos, but he’s a bit on the older side, costs a lot of money and reminds me of Oliver Perez – meaning he has one good outing and then could be erratic the next. Just like how Oliver Perez was as a starter; you never know which Perez you were getting from start to start.

But Bartolo is still a good pitcher don’t get me wrong, but if someone needs to go why not him? By keeping all 6 pitchers active and pitching regularly they will ensure that Matt Harvey will pitch less and with the off days you can cut his numbers down again even more if need be. Plus you never know when someone might get hurt – going back to pitching depth. You have to play to your strengths – the Mets strength is pitching so do what you can to keep them. Three last points: Bartolo Colon will be a free agent after the 2015 season, Noah Syndergaard and Rafael Montero may not be ready and lastly, pitchers unfortunately get hurt and it’s unknown when extras might be needed. You don’t want to do what the Atlanta Braves had to do when Kris Medlen and Brandon Beachy got re-injured and had to get their 2nd TJ surgeries. They had to get Ervin Santana and lose a draft pick, but that’s what needed to be done because they have no pitching depth.

So if a pitcher really truly does need to traded look into the senior of the group – not a good young arm that has been one of the most dependable pitchers in your rotation the past 3 years. I have been a Met fan for many years, but they don’t always make the best decisions. An example to show their lack of thinking for the future (and my ending thought); my mother and I went to a breakfast where past General Manager Omar Minaya was speaking and my mother asked him a question, (mind you she’s not big into sports) “You have burned through all your pitchers before the end of every season. How do you expect to win a World Series with that strategy?” The room went silent and their was no real solid answer.