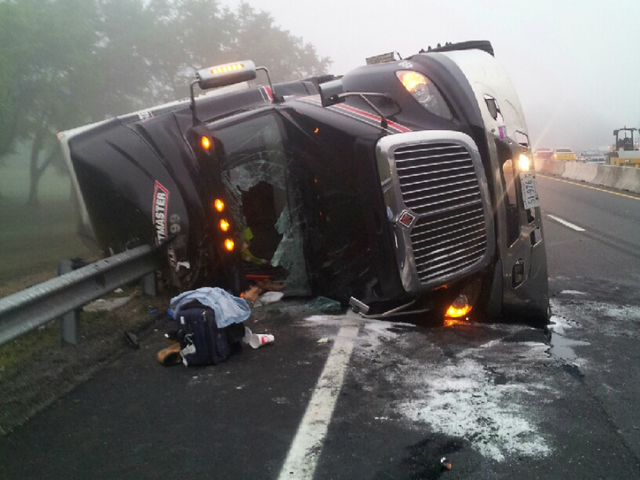 Dangers of Texting While, and Wreckless Driving

Started off my school day pretty stressed today. The reason being, my brother is an aggressive, sometimes reckless driver also uses his phone quite frequently while driving. Today marks the fourth official day of classes for me as a Montclair State University student. I don’t have a car to drive myself to school and taking public transportation I’d have to take at least two buses (three depending on the time of day) and at least an hour and a half, to two, each way to get to school. I’m fortunate enough to have a mother who has volunteered herself and my brother to take me to and from school (20-25 minutes each way), at least for the time being.

I never have an issue when my mother drives me, she’s had a lifetime experience of driving and is truly one of the best drivers I know. I credit her skill driving largely to the type of person she is. My feelings being, the type of driver you are, generally is a reflection of the type of person you are. In my mother’s case, this means being smart and calculated when she drives, for some of my friends, this means trying to show off when they drive, which usually means reckless because they’re inexperienced, and in my brother’s case, this means both reckless and aggressive. He’s the type of driver to do something unsafe, just so he can beat the light, get slightly ahead of another car, arrive at his destination a couple minutes quicker than normal. And, the kicker is that he’ll get annoyed when other drivers have the same kind of behavior. I find myself highly stressed every time I get into a car with him at the wheel because I know that it is a certainty he is going to take some action that borders on plain careless or life-threatening.

This might seem like simply me bashing, but it touches on a larger issue – driving safety, which means driving smart. Not to say that a reckless driver is a stupid person, but people should be calculated and not take unnecessary risks, or let their emotions get the better of them while driving. It’s important to be calm but also alert and keenly aware of your surroundings and yourself. Reckless driving, which includes driving while using a phone, driving while tired, driving while angry or upset, drinking and driving, all create unnecessary risks for the driver doing these things and those around them. Some people seem to forget that driving a car means operating a two-ton beast and that any action they take, can have ramifications way beyond just them. And these same people tend to have the thinking of, “it’ll never happen to me,” and the question is, what makes them so special? The reality, nothing. Nothing makes them so special when it comes to the things that can happen from unsafe driving. According to the Association for Safe International Road Travel, almost 1.3 million people die every year in road accidents, which averages at about 3,287 deaths per day.

This morning it was my brother’s turn to take me to school. As stated before, I was already a bit stressed from getting in the car with him in the first place. Things started off fine, but soon he picks up his phone and starts using it. I tell him to put his phone down because it’s not safe. His response was immediately aggressive, he tells me to be quiet and not worry about it. I react by telling him again how unsafe it is, and that it’s highly hypocritical of him to have once told me not to use my phone while driving (and I have not since) and yet he continues to do it on a regular basis. He finally concedes and tells me to Google directions, and I’m happy because I think maybe I’ve gotten him to stop using his phone while driving at least this time – I was wrong. He gets a call as we are entering the parkway and he looks down, and picks it up. There was more yelling of me telling him to get off his phone, and after a few minutes he finally does. After he puts his phone back down, I take it and throw it in the backseat to make sure he does not pick it up again. I thought to myself, this will force him to wait until we get to our destination to pick it up again. I was wrong again. He gets aggressive with me again then proceeds to cut across two highway lanes to get to the shoulder, reaches in the back seat to pick up his phone and tells me never to do that again. We made it to school safely, but I constantly wonder to myself when the luck will run out.

Currently, there is no national ban on using a mobile device while driving, but many states have passed laws outlawing it, and some requiring a hands-free device be used. Two years ago AT&T commissioned a study as part of the “Texting & Driving … It Can Wait campaign.” The study was conducted by Dr. David Greenfield, founder of The Center for Internet and Technology Addiction. According to the Huffington Post, 49 percent of adults admit to texting and driving, even though 98 percent of adults say they know the practice is unsafe. And Dr. Greenfield says those who know it’s unsafe, and try to rationalize it, are displaying clear signs of addiction. “We compulsively check our phones because every time we get an update through text, email or social media, we experience an elevation of dopamine, which is a neurochemical in the brain that makes us feel happy,” says Dr. Greenfield. “If that desire for a dopamine fix leads us to check our phones while we’re driving, a simple text can turn deadly.”

In further support of the It can Wait campaign, AT&T has developed an iPhone app called DriveMode that silences incoming text messages and sends an automatic reply to the texter, letting them know you’re driving. The app turns on automatically after you go above 15 MPH, and for parents the app can let them know if their child has turned off automatic DriveMode.

Texting while driving, and any kind of distracted driving is unsafe, and unnecessary, so do yourself and everyone else a favor and just put the phone down, it really can wait.

9
Number of Americans killed every day from motor vehicle accidents that involved distracted driving, such as using a cellphone, texting or eating.
1 in 4
The probability that a motor vehicle crash involved a cellphone.
40%
The percentage of teens who say they have been a passenger in a car whose driver used a cellphone in a way that put them in danger.
33%
The percentage of U.S. drivers ages 18 to 64 who reported reading or writing text messages while driving in the previous month. In comparison, only 15 percent of drivers from Spain reported texting while driving in the same period.
341,000
Number of motor vehicle crashes in 2013 that involved texting.
4X
How much using a cellphone while driving increases the risk of a crash.
2
Number of seconds a driver can safely glance away from the roadwhile operating a motor vehicle.
5
Number of seconds drivers take their eyes off the road to send a text message, on average.
46
Number of states (plus Puerto Rico, Guam and the U.S. Virgin Islands) where texting is banned for all drivers, regardless of age.
21 – 24
Age group most likely to send a text or email message while driving, according to a 2012 survey.