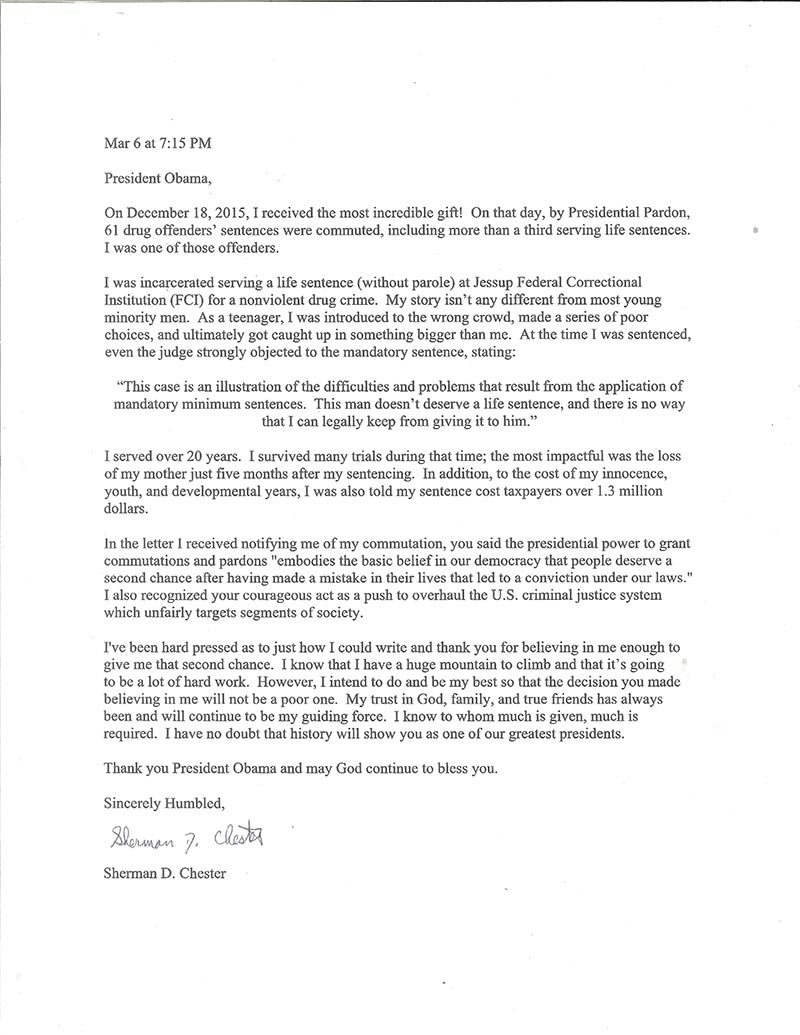 I’m subscribed to the White House email list and this morning I decided to take a look at some of the emails I’ve gotten from it (which I do not often do). The subject line for one of these recent emails reads “This letter Sherman sent me” and for some reason that caught my interest. The email talked about a letter President Obama received from a formerly incarcerated man, Sherman D. Chester, who he’d pardoned. The man was sentenced to life in prison for a non-violent drug crime. The judge who sentenced him did not feel the punishment fit the crime, saying at the time of sentencing, “This case is an illustration of the difficulties and problems that result from the application of mandatory minimum sentences. This man doesn’t deserve a life sentence, and there is no way that I can legally keep from giving it to him.

Chester served 20 years in prison before being pardoned by Obama last year in 2015. According to the White House website, President Obama has commuted the sentences of more people than the last nine presidents combined.

According to BBC News, the US has half of the world’s prison population of about nine million people. The rate of incarcerated in the US is 724 per 100,000. The high numbers of incarcerated people come at a great cost to the US. Each year the US is spending approximately $80 billion to keep prisoners locked up, and the ones that benefit the most from these high numbers of incarcerated are companies like CCA or Corrections Corporation of America, a company that owns and manages private prisons and detention centers. In some states, CCA has contracts with the state government that require that their prisons be kept at 90 percent occupancy.

As Chester says himself in his letter, his story is much the same as a lot of other young men, who got mixed up with the wrong crowd and ended up in way over his head, and locked up for a time not befitting the crime. A justice system that would lock up a man for life for a nonviolent crime, but let a man off with less than six months in jail for rape, must surely be broken.